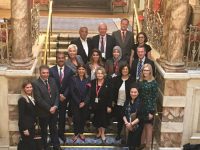 This past week DPI carried out a comparative study visit to Dublin and Belfast for senior members of Turkey’s business community to learn about the role of business in the Northern Ireland peace process and the effect of peace on the economy.  Topics discussed included the benefits of peace for the Northern Ireland economy, how … Read moreDPI Comparative Study to Dublin and Belfast 10 – 13 July 2017